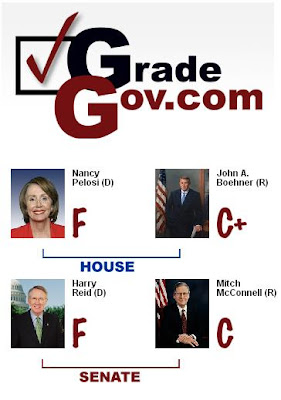 Saw this on Fox News this morning. You have to register and then you can only grade one Communist/Politician a day, but it sorta makes you feel good.

Remains to be seen, if anyone in D.C. will pay this website any attention.

You can vote for anyone you want daily. Does not have to be one of your Congressmen or Senators either. So when they start spouting their commie, socialist propaganda, you can log on and let them know how you feel about that, and give them a good grade, if they decide to actually preserve, protect and defend the Constitution.

Posted by esryle at 4:12 PM No comments:

What You Need to Know About Swine Flu

Video- Inside the Home of a Swine Flu Victim

Better Than A Flu Shot - Vitamin C Does The Trick

Vitamin C Beats Bird Flu and Other Viruses, Too

How to Avoid the Flu - Swine Flu Joke

Eat right! Make sure you get your daily dose of fruits and veggies. Take your vitamins and bump up your vitamin C. Get plenty of exercise because exercise helps build your immune system. Walk for at least hour a day, go for a swim, take the stairs instead of the elevator, etc.
Wash your hands often. If you can’t wash them, keep a bottle of antibacterialstuff around. Wear a mask when out in public places and avoid going out in public as much as possible while the swine flu is spreading. Get lots of fresh air. Open windows whenever possible. Get plenty of rest. Try to eliminate as much stress from your life as you can.

You can take the doctor’s office approach. Think about it, when you gofor a shot, what do they do first? Clean your arm with alcohol.. Why? Becausealcohol kills germs. So…… I put on my mask, walk to the liquor store (exercise), I put lime in my Corona (fruit), celery in my Bloody Mary (veggies), drink on the bar patio (fresh air), get drunk, tell jokes, and laugh (eliminate stress) and then pass out (rest). The way I see it, if you keep your alcohol levels up flu germs can’t get you!!!!
Posted by esryle at 8:29 AM No comments:

Michael Savage is none to happy about the Administration's and U.S. Navy's response to the current piracy situation involving a American cargo ship and the seizing of it's Captain as a Hostage.

Savage wonders what the Navy is used for if it can not sink pirate ships.

He says the Navy has become useless and now is just Floating Brothels with Propellers.
(I think he is referring to the integration of women on our Surface ships.)

Another comment says our submarines are only good for running into sand bars.

I like Savage but he is being a little hard on the Navy. Unfortunately the Navy can only do what they are given orders to do by regional military commanders and the President himself.

You can listen to the Michael Savage podcast in question here.

Michael Savage 04/09/09 H1
An important look at the history of naval ships and Muslim pirates over the centuries. Social enterprises with propellers are what we are now. What is the use of having a Navy if you can't shoot down pirate ships?

Related Links:
The Navy vs. The Pirates: How the mighty have fallen

Unbalanced warfare not new for US Navy